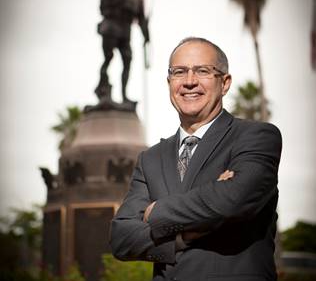 An executive with a long history of military service in his family aims to help returning veterans. He has big plans.

Giveback: Robertson organized the program in 2013 and now spends about 20% of every working day on it.

Mission: Assists returning military veterans with financial needs and employment when they come back home.

The idea that freedom isn’t free is more than a bumper sticker to Bill Robertson.

The attorney and CEO of Sarasota-based law firm Kirk Pinkerton, Robertson has military ancestors who date back five generations, all the way to his great-great-grandfather, Col. John Fite. The colonel fought for the Confederacy in the Civil War, and was captured in the Battle of Gettysburg during Pickett’s Charge. Fite, according to letters and memoirs Robertson still has, also met Robert E. Lee and went drinking with Stonewall Jackson during the war.

One of William Robertson’s sons is Bill Robertson, the attorney with a deep appreciation for the military and military history. “People don’t always appreciate the freedoms they have and what it costs,” Robertson says. “Veterans are the most uncared for and ignored segment of this country, in my opinion, despite all the things they have done.”

Robertson wants to change that, one veteran at a time, through Helping our Heroes, which assists military veterans with financial needs and finding a job when they return from service. “The program has exploded with increased interest and individuals looking to get involved,” says Robertson. “We want it to get bigger and become a one-stop shop.”

Helping our Heroes, which Robertson launched in 2013, isn’t a formally registered 501(c)(3) nonprofit that takes donations. There are no fulltime employees. But it works with two established nonprofits, the Women’s Resource Center of Sarasota County and Goodwill Manasota. Those organizations screen the veterans who will receive employment and financial assistance.

Robertson has built awareness of Helping our Heroes in the Sarasota-Bradenton business community in several ways. Sarasota-based Three Six Oh Public Relations has helped spread the word through an extensive Web and social media campaign. A Helping our Heroes website debuted in November.

Another way is through a radio show he hosts, “Let’s Talk Law,” on WSRQ 106.9FM/1220 AM every Friday from 4 to 5 p.m. The last Friday of each month is dedicated to veterans and Helping our Heroes.
A final awareness platform is through the Gulf Coast CEO Forum, where Robertson is a member and he talks about the program directly with other members. Several Forum members have been on the radio show, and a few have donated money and hired veterans on the spot. Says Robertson: “The networking with the business community has been very successful.”

Robertson, a personal injury attorney who also works with clients that have applied for BP oil spill claims, spends about 20% of every working day on Helping our Heroes. “This will be my passion for the rest of my career,” says Robertson. “It feels great to shake someone’s hand and know I did a little bit to help.”